Today I’m going to explain why the almighty push-up is one of the best bodyweight exercises you can perform. Contrary to this belief is where a false belief exists with some that will say you can’t develop a strong, lean, muscular body with push-ups. This is complete BS and today I’m going to set the record straight.

Ok so push-ups aren’t going to offer the same results as lifting free weights, but then again the benefits are just different. The muscular builds of those that understand how to harness calisthenics for achieving power and performance is quite positive and very prevalent if you take the time to notice.

With that being said I want to address a number of misconceptions concerning the push-up exercise here. I’ve included a small list here to get the record straight when it comes to push-ups and what they can do for your physical function.

This particular misconception just flat out irritates me every single time I hear it. Look, the number of pounds on a barbell, or dumbbell isn’t the only measure of strength when it comes to human performance. Strength has many faces and comes in many forms.

If you don’t believe me then just look at the differences between powerlifters and gymnasts. Sure that powerlifter can pull a shitload of weight on that deadlift, but more often than not he won’t be able to hold an iron cross like a gymnast can between a set of rings suspended in mid-air.

With that being said the push-up offers strength, muscular endurance, and the ability of a trainee to control his, or her body in the movement through proper muscular activation.

The benefits are just different than that of a barbell. I love lifting barbells too, but I am also a big believer in incorporating push-ups into my training programs for both myself and my students for enhancing core stability, shoulder stability, and for improving ground based agility particularly for my fight athletes.

Push-ups will build a different type of functional strength for you.

Push-ups are too easy

This is generally a statement I hear from those that can’t perform a proper push-up in the first place.

I’ve hammered away on this before, but as common as the push-up exercise is it is also one of the most butchered exercises as many people will lay claim to having performed hundreds of push-ups in various boot camps and group fitness classes until a further examination unveils the truth.

A common push-up flaw that the majority of the population is guilty of typically involves a trainee failing to stabilize their shoulders by collapsing their scapula causing their neck and head to reach towards the ground during the descent of the push-up.

This is me demonstrating this technical flaw with my head collapsing towards the ground. 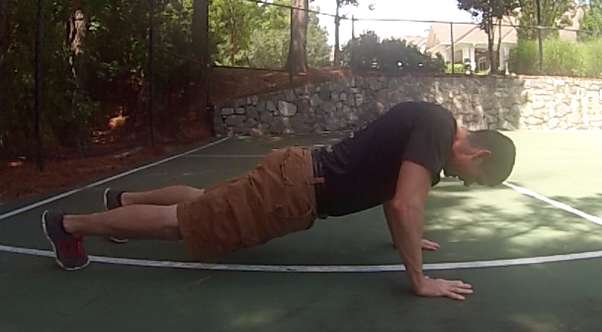 This is me demonstrating a properly stable scapula keeping my head and neck in a neutral position. 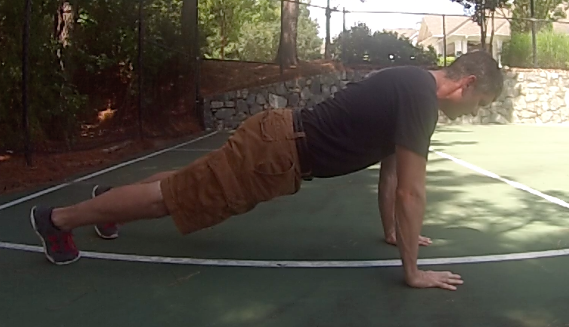 Aside from this common technical flaw being bad for the neck and shoulders it also gives many people a false sense of actually performing a large number of push-ups…when in fact a single push-up is never even performed.

Push-ups are one dimensional

This is a common misconception that also causes me to raise an eyebrow. This sort of thinking typically comes from someone that has very little experience in training and doesn’t understand the concepts of progression and variation.

Look there is a damn good reason that the push-up exercise is one of the most commonly prescribed exercises in nearly every fight gym, military, and independent box gym across the globe.

The reason is because the standard push-up is extremely powerful on its own. However the real value comes once you’ve become proficient at the standard push-up as you can then start to implement variations of this movement to make it more challenging and to help you produce some significant strength gains. These variations can be slight, but highly effective.

Such variations can include a simple adjustment in your weight redistribution by simply performing a set of push-ups with your feet elevated up onto a bench, or plyo-box. This shifts more weight to your arms and upper body making the movement immediately more challenging while also changing the angle of how you track to and from the ground.

Another variation may involve you performing walkout push-ups where you can walkout on your hands extending your body into an upright push-up position forcing you into more movement and core activation prior to performing the push-up. Another variation might involve even more intense weight redistribution with you making an attempt at a one arm push-up.

You see the variations are almost endless and you can continue to build real world strength and muscle by steadily introducing more and more challenge to the movement.

Push-ups are bad for your shoulders

This is a general statement that frustrates the hell out of me.

First of all, as a general rule of thumb you should always be skeptical of people that make broad generalizations concerning anything in life. That’s just good advice to have for everything across the board and shouldn’t just be limited to exercise.

Ok with that being said push-ups are NOT bad for your shoulders. If you experience shoulder problems from doing push-ups it’s NOT because of the push-up alone that you’re having the shoulder issue.

Sure there could be exceptions where someone does a push-up and has a shoulder problem, but there are a shitload of other things you should look at before laying blame directly on the push-up.

For instance, if someone has a weak core center, forward rounding shoulders, and a weak posterior they should be addressing those issues. However if they are always performing pushing movements to reinforce their broken posture due due to a development of anterior dominance then it’s their terrible choice of exercise selection that is the problem…it’s not the push-up.

In this scenario it’s no different than you driving your car fast with no oil in the engine and having your engine blow up. After such an occurrence if you’re blaming the fast driving then you’re misplacing the blame.

The fact that your engine didn’t have oil in it in the first place is the REAL problem. Driving fast might have sped up the problem, but the engine was going to blow regardless in that particular situation.

I’ve already touched on technique a bit in the previous section, but piss poor exercise technique can cause injury and that is true with any exercise…not just the push-up.

Misconceptions About Push-ups: The Takeaway

We have a simple saying in the fitness industry among many of my colleagues where we say There is no such thing as a bad exercise, only bad people. This is just a short way of saying that it’s the individual’s responsibility as to what happens to them concerning their training.

In other words if you make poor choices in terms of not addressing your body’s needs then the blame for this falls on you, not on the exercise.

How often do you incorporate push-ups into your strength training?

What push-up variations do you use in your training?

Also if you want to learn how to tie these together then make sure you check out my brand new 120 Day Functional Fitness Training Program right here below! I guarantee it’ll get you into the best shape of your life, or I’ll give you your money back no questions asked.

What Push-up Protocol Are You Using To Test Yourself?

The Miracle Of GTG For Building Strength

The Correct Hand Position For Your Push-ups

The original publishing date of this article was back on May 31, 2018. I wanted…